One of the most vivid memories I have of the final preparation of the manuscript of my book, Butterflies of Indiana: A Field Guide involved the Hayhurst’s Scallopwing (Staphylus hayhurstii). The Hayhurst’s Scallopwing is a small, dark brownish-black spread-wing skipper in the subfamily Pyrginae. They are low, weak-flying skippers, and when perched, habitually hold their wings open. Males are mottled black above, females are paler with varying amounts of tan or gray flecking on the wings. Both sexes possess the distinctive scalloped hindwing, sort-of triangular in shape with a notch out of the margin. Their larvae feed on Lamb’s Quarters (Chenopodium album) and other weeds in the Goosefoot family.

While searching the state for subjects to photograph for my book, I rarely encountered this skipper, possibly because I spent most of my time in state nature preserves which usually lack the weedy habitats supporting its larval host plants. The most reliable place I found for it, although still unpredictable, was our backyard. We usually saw a few in May and then a few later in the summer when the second brood appeared. I once encountered it along a roadside adjacent to a nature preserve near our house, it appeared fairly regularly on my parent’s property, and a friend also showed me a fairly sizable population near Cincinnati. From these sightings I was able to obtain photographs of the upperside of both males and females. After 12 years of photography, however, these scattered sightings had not provided an opportunity to obtain a photograph of the underside. The underside is very similar to the upperside, its most distinctive feature is still the scalloped hindwing, which shows the same notched margin whether viewed from above or below, and, in my experience at least, this skipper rarely closes its wings. So, I really didn’t need the image to show any diagnostic field marks and therefore wasn’t important enough to pay for someone else’s photo, as I had done for several other images that I was missing. But I still wanted it all the same. I was proud that I was showing more upperside and underside views of males and females, seasonal forms and subspecies, than most other state butterfly guides, so for “completeness,” I really hoped to get the shot.

The week of my deadline to hand in the final manuscript files to the publisher I had one last chance. It was late July, and one hot afternoon my wife Sandy told me there was a Hayhurst’s out in the backyard. And, oh, it had its wings closed. I asked her where it was and then I ran out to the car to get the camera. I ran into the backyard, found the skipper and then, just as I was trying to get close to it, it flew off. Gone.

The next day was another hot, sunny day. At about the same time it reappeared in about the same spot—a little circle herb garden where we have some marigolds growing around our basil. Behind the basil is some Butterflyweed, Mountain Mint, and Prairie Dock. The skipper was on a marigold leaf. All I had to do was get to it, preferably without stepping on any of the other marigolds (Sandy gets somewhat upset when I step on her marigolds) or the basil (we both get upset when I step on the basil). It was, as usual, on a lower leaf near the ground. To get a good angle with its wings closed I had to be aiming my camera directly from its side, so I had to get on my knees, and eventually nearly lie down on the ground, still being careful not to mash the marigolds or the basil. I almost made it. But just as I was getting ready to aim through the viewfinder, off it went. It circled around and landed nearby—same garden, different marigold. I tiptoed over to the spot. Once again, I almost got there. This time it took off and disappeared.

It was hot the next day too. The skipper reappeared. Again I tiptoed through the marigolds, and once again, off it flew. I was beginning to get annoyed. The manuscript was due in two days. I had a subject right here in the yard, and I couldn’t get the shot.

The next day was promising too—hot again. Again the skipper reappeared. Of course, it had been flying for several days now, and it was getting a bit worn around the edges. I decided I didn’t care—I could clean it up in Photoshop. Today was going to be the day—I was not going to be beaten by a skipper with a one inch wingspan. On my first two approaches I got close—real close. Just as I was pressing the shutter it took off.

After the second failure it disappeared, and I thought I was out of luck. But then, another one appeared—a much nicer (no Photoshop required) individual. This one allowed a close approach, but perched in a spot (on purpose?) where my angle was blocked by leaves so I couldn’t aim directly from its side. I did the best I could—but it wasn’t good enough. I jostled a leaf, hoping it would fly off and land close by in a more favorable spot. It flew off, but I’m not sure if it landed in a more favorable spot because it was too far away to see.

The afternoon was drawing to a close. The files were due the next day. There was one last patch of sun in the backyard by our back door. Next to the door is a patch of Solomon’s Seal—tall plants, maybe three feet tall, with large oval leaves and arching stems. In the middle of the patch, in a nice sunny spot, was a Hayhurst’s Scallopwing, and its wings were closed. Perfect—one last chance. All I had to do this time was lie down on the ground (the skipper was low on the plant again) and aim the camera up through about three layers of leaves. I got in position but I couldn’t see the skipper, all I saw was leaves. I fired off a few shots in disgust, but no luck. The skipper continued to sit there. I stayed in position. I still couldn’t get an angle on it. I hoped a rare bi-directional gust of wind would blow the stalks of Solomon’s Seal apart, providing a direct shot at the skipper. It didn’t happen. I finally tried to move a few stems out of the way. I got one moved, but the second spooked the skipper, and off it went, to ports unknown. I got up, brushed myself off, and walked inside, a beaten man.

So, if you look at page 91 of my book, you will notice there is no photo of the underside of Hayhurst’s Scallopwing.

Flash forward to May 23, 2015. An unusually hot day. Sandy told me there was a Hayhurst’s Scallopwing in the backyard in the circle garden. And oh by the way, it had its wings closed. Off to the car I went to retrieve the camera, then to the backyard. I found the skipper—this time directly on the ground, imbibing minerals from a bird dropping. The marigolds and basil were there again, but they were easier to tiptoe around because they were smaller plants since it was May instead of July. This time I was able to lie on the ground and get a good angle through a couple marigold plants. Mission accomplished, finally! Only three years too late. 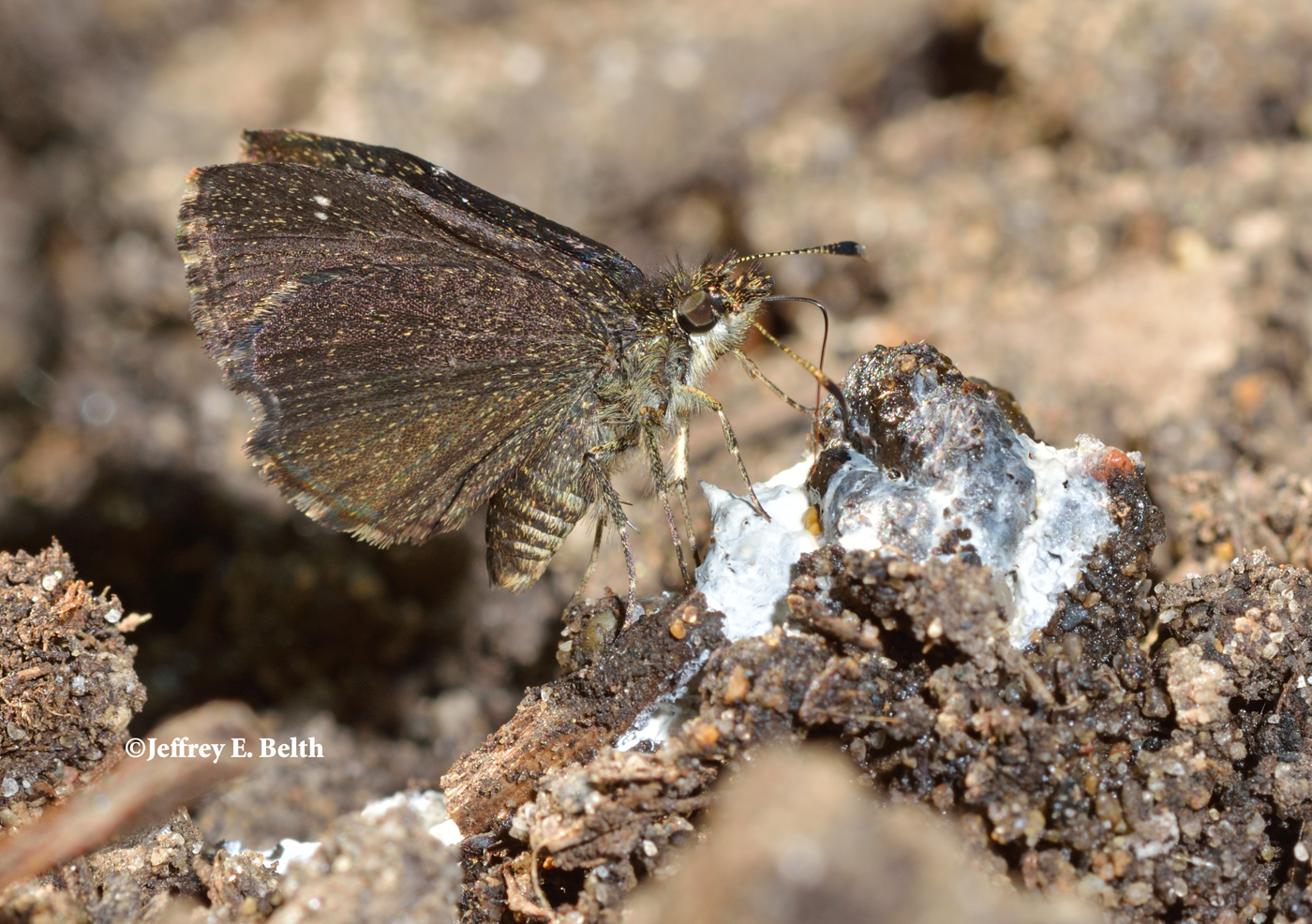